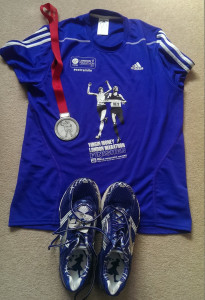 I went down to London on the Friday before the race to pick up my number from the Expo, held at Excel in Docklands. I’d wondered about the number of people who’d be trying to collect numbers simultaneously but the organisation was excellent and it only took me a couple of minutes to pick up chip & number. I then went through to browse the Expo exhibits and was lucky to catch Wilson Kipsang & Dennis Kimetto being interviewed on stage. Really inspirational athletes, modest but with a clear passion for the sport. Martin Yelling was great at teasing out subtleties in their responses. He asked both how they planned to celebrate after the race and Kipsang said he’d have “a little rice” which drew a laugh from an audience with pies and pints on their minds. Martin allowed a couple of people in the audience to ask questions before he wrapped the session up. At this point quite a few folk (maybe 20+) went into the stage and started taking selfies with Wilson & Dennis, which felt disrespectful in a way, but the guys kept smiling.

On the race day I travelled to Blackheath, firstly on the tube and then overground from Charring Cross – all free courtesy of Transport for London, you just had to show your race number. The walk from Blackheath station towards the start was interesting in terms of the atmosphere. People were silent or chatting only quietly. Nearest I can liken it to is the walk back from Murrayfield when Scotland have lost and people don’t really like talking much. It wasn’t solemn exactly but certainly far from celebratory. I got to the Green start area around 8:20am and there were already thousands there and for the next couple of hours thousands more arrived. It was chilly but the arrangements were excellent. We started to get into the pens around 9:30, I was in number 5 (of 9). Around 9:50 we started discarding bin liners, old jumpers etc and a guy with a Yorkshire accent behind me said “I’m coming back ‘ere after, there’s some good jackets there”

I’d had the impression from TV that it takes ages to cross the line but it wasn’t so for the Green starters. Even though I was starting half way back I still crossed the line at 10:13, only three minutes after the gun. I don’t generally run with headphones but had been listening to podcasts whilst waiting for the start and just as I approached the line a text came in from number 2 daughter wishing me luck & hoping I’d taken appropriate chafing precautions – a nice way to start. From the start and continuous for the rest of the route there were large crowds, all seeming to be having a good time. Pubs on the route either had bands playing outside or PA equipment & DJs, Springsteen’s Born to Run just before Greenwich was a particularly welcome & uplifting sound.

I’d set myself a target pace of 9:10/m and despite the sheer number of runners was 4 minutes ahead of target by Tower Bridge. We turned right towards Docklands and shortly after managed to spot & wave to Valerie (Mrs R) which perked me up no end. A couple of minutes later I spotted Paula on her way back from Docklands. Shortly thereafter Spiderman, a couple of yards ahead of me, waved to Spiderman running in the opposite direction, clearly one of them was an imposter.
At 18 miles it all started going wrong and by 21 I wasn’t a happy bunny at all. My right shoulder was dropping down and it felt I was running a bit sideways. Even some great music and atmosphere from RunDemCrew didn’t help and by 23 (back at Tower Bridge) I was in real trouble. The next few miles where very, very tough.

Two-thirds the way down Birdcage Walk I heard Claire Jenkins, Chief Executive of Grow Movement (the charity I ran for – www.growmovement.org ) shout to me & I turned back to wave and nearly fell over in turning forwards again. Really happy to have seen her as I could easily have been right on the other side of very wide road. Very unstable and struggling at this point.

Round the corner and onto the Mall, the sign saying “385 Yards To Go” was a welcome site and I crossed the line in a bit of a blur. I’d lost the 5 minutes I was ahead of target at the half way stage and another 6 to finish in 4:11:20. There was great organisation in the finishers’ area and several paramedics separately asked if I was alright (I wasn’t really). Collected my medal & goody bag and had a sit down for a couple of minutes before heading off to The Porterhouse pub (highly recommended, near Covent Garden) to meet Valerie & Claire.

The organisation was outstanding from start to finish, the support from the crowds was amazing and overall a truly memorable (but painful) experience. I’m really grateful to Haddington Running Club for the opportunity to run. Sponsorship page at https://mydonate.bt.com/fundraisers/jeremy4grow is open for another month. 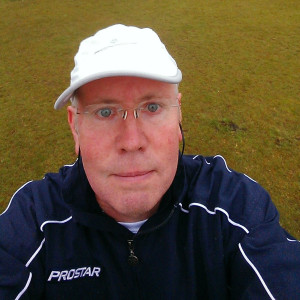