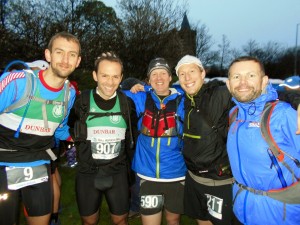 Members of both the Running Club and Jog Scotland were out in force again at the weekend with for some, it being the biggest weekend of their year.

There were three Haddington runners doing the “full-fling” and seven forming two relay teams of four, “The Haddington Goats” and “Graham’s Grunters” with the eighth member being Colin Elder (Carnethy).  The runners travelled and met with other full-flinger friends James Addie, Lee Curtis, Andrew Sheldrick and Nick Williamson (Dunbar).

Everyone had fantastic time and to prove it Lesley and Martin didn’t stop at the end of their relay stages and kept running all the way to Tyndrum!

Sunday saw more action. Kelly McInnes, Malcolm Quinn and Jeremy Roebuck competed in The Virgin Money London Marathon. Kelly and Jeremy were hoping to try and meet up with each other before the race but alas this wasn’t to be due to the huge scale of this event. We waited with baited breath to hear how our HRC members faired and the news eventually filtered through that all had done extremely well.  Kelly achieved yet another PB. Ex-club member, Callum Reid produced another superb performance and runners from Dunbar and Musselburgh also did well.

There was even more happening on Sunday with more Haddington runners competing in the Winton 10k – waiting for results!