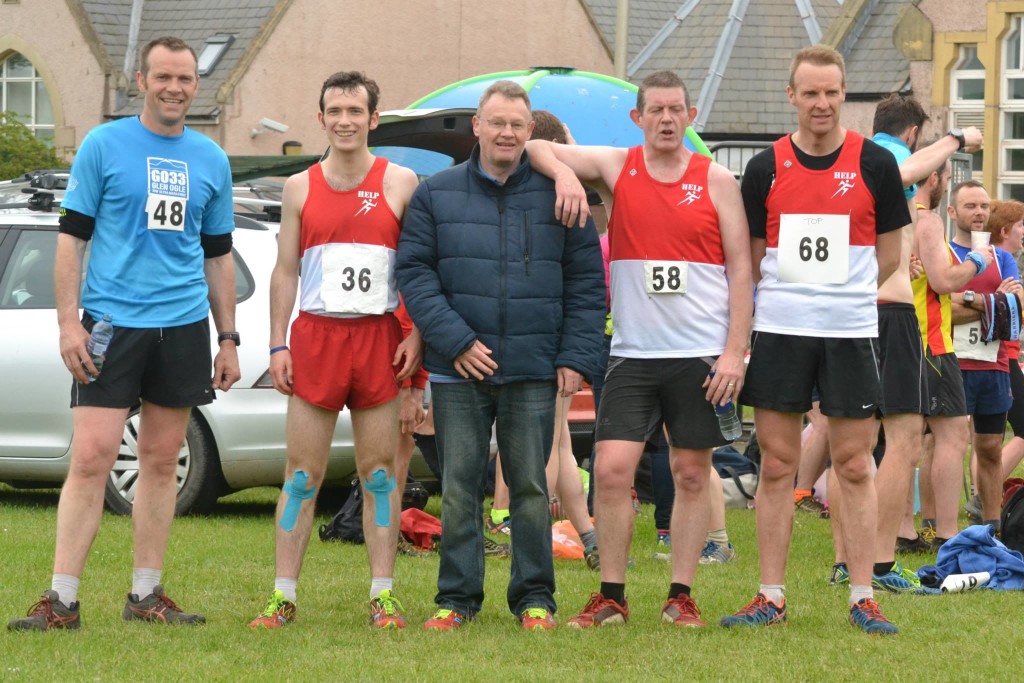 Today is the 34th running of the Traprain Law Hill Race. I’ve ran this route countless times. Sometimes as a hard training run and sometimes as a gentle recovery run, mostly with fellow villager, runner and general clown, Lee Curtis. We’ve been up there in all seasons and conditions and even when it’s freezin’ cauld, blawin’ a hoolie and pissin’ doon I’m always I happy to have done the route when I get back to East Linton. This is only the third time I’ve actually raced the route though and I’m not holding out much hope at all!

It seems quite a small field this year and it’s great to see the usual suspects but even better to see some new faces with David Woods and Roger Telford from Haddington Running Club, Dorothy & Billy Elliot and Gordon Eadie from “Musselnethy” lining up for the first time. There are also a few more “unattached” friends getting ready with surfer dude Damon there and young guns, Darrel, Carig and Jamie in. Naturally Dunbar have another excellent turn out with only one new face I don’t recognise. There’s the usual peppering of other clubs too and I meet ex-schoolmate Dod from Chrinside and we set off for the dreaded warm up. He tells me that Cathy will be at the river crossing so I take a mental note to try and say hello.  Rachel & Neil wish me luck and I get a cuddle from Sophie.

Having “entered the cage” I hear a shout from the side to see Kazz with Digby wagging his tail and happy to be out and it’s great to hear the encouragement from the small crowd that had gathered.

Then, we’re off. I deliberately try to hold back running down school road as I know that if I go off too fast I’ll suffer later. I must be in the last third or even quarter of the field as we run up the High Street and down towards the Tyne. I laugh out loud as we turn right completely cutting the corner and running across the grass which is actually someone’s garden (sorry Fred but I’m not taking the long way round). From this point it’s pretty much single file to the river crossing with only the steep climb up and down the steps and quite a nice series of twists through the trees to break up this section.

As we get to the crossing it’s time to try and take a place or two as there’s always one or two runners who are quite tentative here. You have to be confident and try to keep forward momentum and indeed I manage to pass a couple. I hear big Graham “The Train” asking if a girl is OK after a near fall. She is and there’s no need to stop. The climb up the hill out of the water isn’t as slippy as in the past despite the recent rain and my worn out Altra Lone Peak zero drops (zero grip more like) manage fine. However, they really are knackered and they’ve let in some gravelly bits and hurts. F**k! 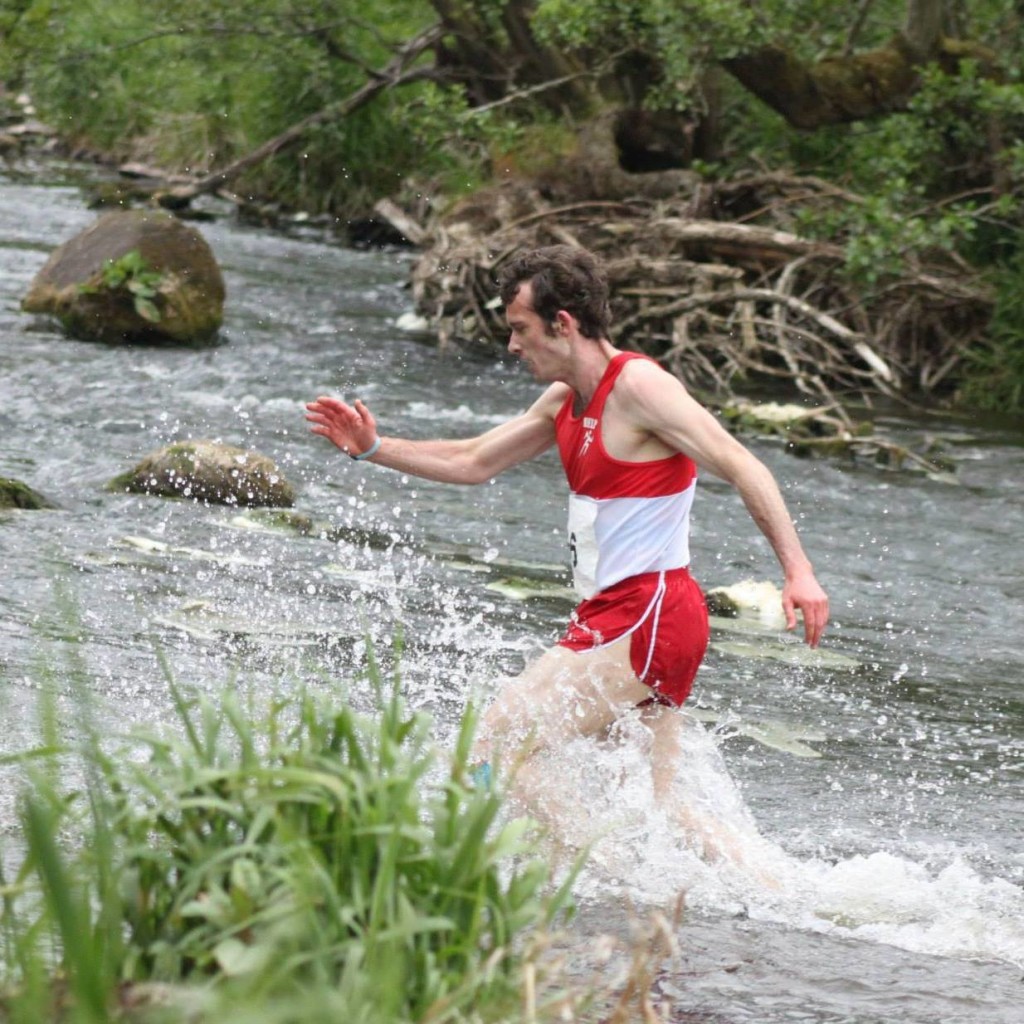 The climb up the hill, through a small field and over the fence takes us to the bottom of Kippielaw where things start to get tough. I stop short of the top of the hill and start to walk at “the usual tree” and Damon trundles past. I hear Lee cry from behind, “Ultra runners walk the hills”. This strikes me in two ways. First is that I think I might get a tee-shirt with that on and second. If Lee and Graham are still behind me then I’ve either gone off to quickly or Lee really is hungover! As we crest the hill I start to run again and pass Damon as we head up the side of the field towards the bottom of the Law. In the distance I can see Andrew and Roger but for now it’s time to concentrate on what’s underfoot. It’s quite a gentle slope but as the hill steepens I hear shouts of encouragement from Sandy and I manage to make an extra effort to pass Andrew.

The climb up through the trees is tough and Damon passes again (when will this laddie learn?) then it’s a short trot through the grass to the gate which is tied open (thanks) and the so called diversion looms. We detour around to the left instead of straight up the fence line (something to do with there being no rope this year) but this is actually trickier than the normal route and I nearly lose my balance a couple of times. I manage to stray too far to the left I’m passed by Darrel and another runner and I look up to see Lee and Graham passing me to the right. S**t! No choice, just keep going as we start to run over the top of the lump I manage to pass another before being greeted by Neil and Adrian then shout a hello to Bob Marshall who always gets great photies of so many runs. I see Lee just in front stick with tradition and tap the top of the trig point as he passes. I do the same then it’s the start of the downhill. 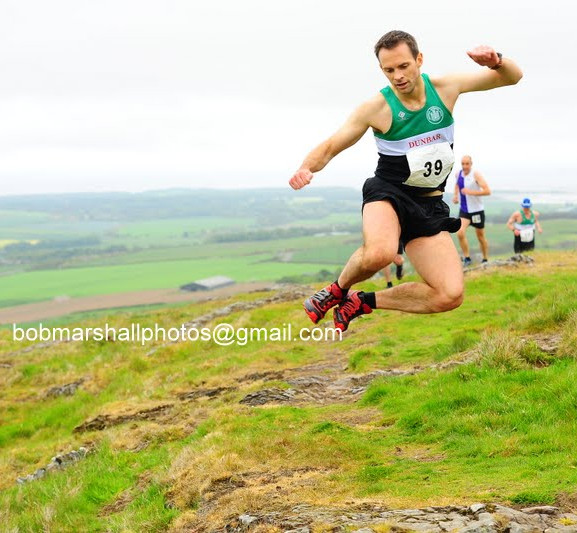 As I try to pick up speed my legs wobble over the lumps as I adjust to the new posture. I try to take my brain out and let go as much as possible and hope that I can get past some less experienced runners but alas it isn’t to be. Newcomers Damon and Darrel do really well and I struggle to make ground. As we reach the stile there’s another small but vocal group of supporters and this spurs me on to take the risky strategy of louping the stile and on to the road. “Did it. Didn’t land on ma coupon” Down the road I can now see that I’m getting closer to Damon and manage to pass him on the farm track leading to Hailles Castle and now I’m catching Lee. We come on to the short tarmac section at the castle and Sandy is there again. Brill! this spurs me on and I shout some abuse to Lee who responds in the usual his Geordie manner of bearing his arse to me!

The short section down to the bridge is quite tricky and I have to be careful then we’re over the bridge. It’s only about 2k to go now so it’s “hang on time”. I feel my shoelace has loosened and it’s hitting my leg. Shit! I’ve no choice but to stop at the big stone at the river crossing point and lose a few seconds. As we run under the bridge and into the trees to the bit where the two falls I had that caused me so much trouble comes up. “Don’t trip. Lift your feet.” I’m safely past and to the steps and as I reach the top it’s time to take the brain our again for the short descent. It’s only about 1k now and I catch sight of Roger in front of Lee. As we reach the top of the short climb onto the road I remark that this is a cruel spot to stand to the photographer! Through the village and I just have to keep hanging on as we turn the corner up the final hill. I ignore the “Hello” from number one son, Chris as I see Lee pass Roger then it’s over the line and on the grass for a lie down.

It’s time to get a wee bit water and find our pals. I’m greeted by Kazz who tells me she won a wobbly spoon in the raffle and also a bottle of Pernod. Yay! I get a cuddle from my wee Grand Daughter, Sophie and everyone’s happy. Karen tells me the great news that James was first and I catch up with the rest of the posse while waiting in for the rest of the runners to come in. Last in is local vet Robert Russel with a big smile.  Magic! 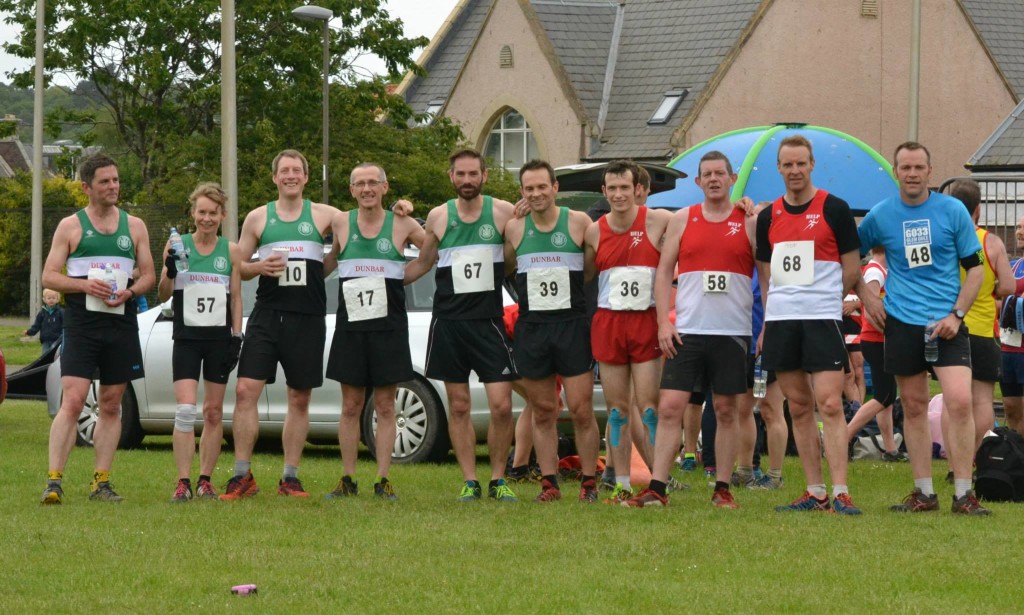